Increase horsepower by replacing the restrictive stock intake to handle a much larger volume of air.

A lot of aftermarket companies talk about improving intake air flow. Make no mistake, good air flow does matter. But when it comes to really enhancing your diesel engine’s performance and power, flow isn’t the whole story. You’ve got to have high intake density (I.D.) because without it, you’re leaving untold power, performance, and efficiency on the table. And that means you need cold high-flow air.

In a diesel, the turbo improves I.D. by compressing the air. The intercooler improves I.D. by cooling the air. The stock intake air system decreases density by de-compressing and then heating the air. We want to minimize that loss of density. A true cold air intake system provides cold, high-pressure air which is far richer in oxygen content, providing exactly what your engine needs. Our competitors boast about flow but they don’t talk temperature. And that’s the truth about cold air intakes!

The Banks Ram-Air is superior because it couples maximum flow with minimum temperature. Its huge filter, smooth passageways, and high-flow outlet means airflow is cool, dense and unobstructed. And like every Banks system, it’s built to last.

Thanks to its enclosed cold-air housing, huge inlet, giant filter and streamlined design, Banks Ram-Air Intake maximizes the flow of cool, dense air to the engine for greater power and fuel economy. It flows up to 116% better than stock. And delivers greater air density to the turbo's inlet than the stock system and every competitor tested!

An aftermarket exclusive: Banks Ram-Air accommodates engine movement, which protects the components and extends service life. What's more, Ram-Air is designed to not cause fault or error codes.

Adding a cold air intake is pretty much the most popular aftermarket addition people make to their trucks because it's relatively inexpensive, it's a quick and easy install, and the power gains are noticeable. No company gives you better performance — or better looks — than Banks.

Choose from the traditional red, oiled filter or the all-new black, dry filter. Plus, you can even get an extra layer of filtration protection by adding a pre-filter to your order. 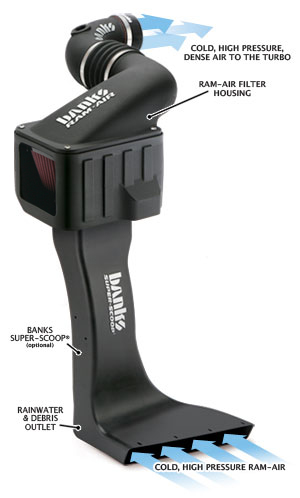 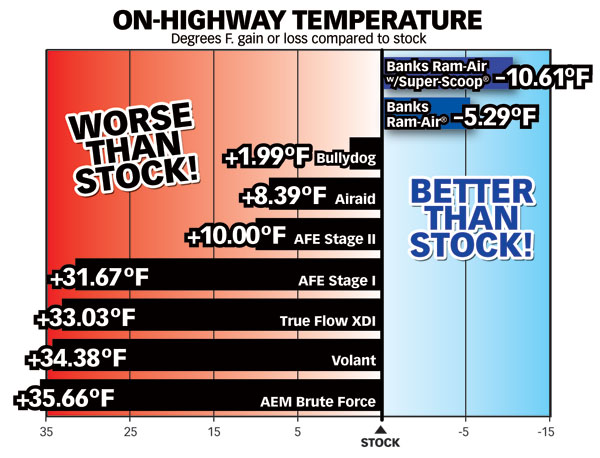 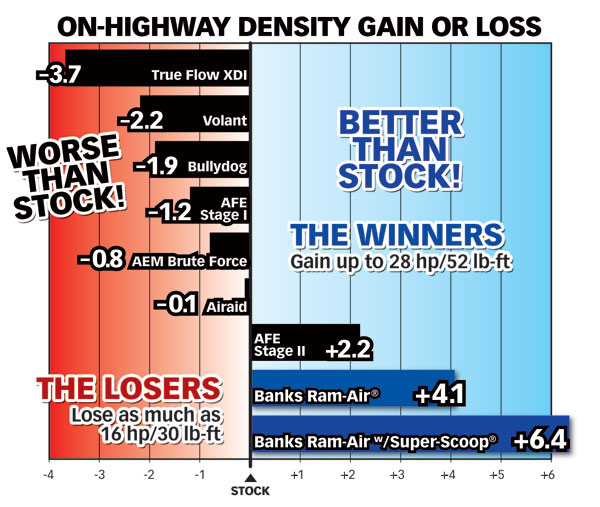 Vehicle Speed, Engine RPM and Accelerator Pedal Position were logged to determine the load conditions and speeds. Temperature was measured using thermistors for increased accuracy. They were mounted to measure ambient temperature as well as temperatures at the filter and compressor inlets. Pressure transducers were used to measure pressure in the same locations. The intake system effect on air density was evaluated by comparing the temperature and pressure of the ambient air condition with the temperature and pressure of the air at the turbo compressor inlet.

All data presented assumes an ambient temperature of 77° F and ambient pressure of 29.24 inches of mercury, per SAE standards.

Banks Ram-Air
Replaces the stock setup with new housing, filter with 7.5” outlet, lid & ducting system made of cross-linked polyethylene & polypropylene, all the way to the inlet of the turbo compressor. Inlet to filter housing is sealed to the fender air duct with open-cell foam.

AFE Stage I and Stage II
Both systems use a filter with a 6” outlet. Stage I leaves the filter exposed with a sheet metal heat shield.

Stage II has a fully enclosed housing with an integrated forward-facing scoop.

AEM Brute Force Intake
Replaces the stock setup with an aluminum tube, dry filter & a sheet metal heat shield. Filter has a 4” outlet which mates to the aluminum tube.

Airaid Intake System
Quick-fit system filter mounts to an adapter that mates to the factory inlet duct with a 3.75” inside diameter.

Bullydog RFI
Sheet metal enclosure with an opening toward the factory fenderwell opening. Filter is mated to a section of elbow tubing that mates to the factory bellows & silencer. 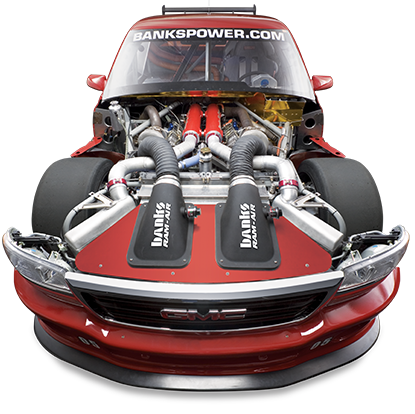 The highest density always equals the greatest power. All the bogus dyno numbers published in other advertisements won’t change that fact.

Gale Banks is the only engine builder in the air intake business. We design and make our own because we couldn’t buy what we wanted. That’s how you WIN!

We design in-house via computational fluid dynamics (CFD) modeling, so we can guarantee an optimum performance outcome before the part is prototyped. Then we test the part against the competition, in the truck & on the road, using established SAE calculations, until we know we have designed the best.

Why on earth would anyone pay money for a product that kills power and mileage? It’s all about density — and  Banks Ram-Air delivers.

Check It Out — Gale tells American Muscle Car how to get more cool air into your engine for better performance!