More About Intercoolers and Boost Tubes

Diesel turbos compress the air, increasing its density but heating it in the process. The intercooler removes that heat, which adds even more density. Boost gauges don’t read density, but the patented (and soon to be released) Banks Density Meter does. If your new intercooler resulted in a boost increase, fine, it’s less restrictive. But, did it improve the air density, is it cooling better as well? That’s what intercoolers do... they cool!

But, they need to do this without blocking the air to your radiator which is just behind the intercooler. If the designer just made the intercooler thick, that won’t be an advantage if your engine overheats and the computer cuts back fuel to protect it. Now you have a power loss. A proper evaluation considers everything... and reveals the Truth About the other guys!

This is the first measure of intercooler performance. If an aftermarket product can’t deliver a boost increase over the stock unit, there’s no point in even opening the box. All the units tested better than stock with Banks the clear winner… So far, so good.

This is the reason for an intercooler in the first place. Boosted air that’s colder packs more oxygen. Cooler intake air and more oxygen lowers EGT’s, improves economy and unlocks your fuel’s power making ability. Measuring air density gain over stock is the most vital aspect of intercooler performance. This is where the Banks patented density measurement comes into play. Banks and AFE are both in the game but BD cooled so poorly that it actually lost density!

AIR FLOW-THROUGH TO THE RADIATOR

If an intercooler blocks your engine’s radiator from the incoming airflow it needs, the resulting high temps cause the ECU to cut back fuel, leaving you with de-rated power and heat-related breakdowns. The point is to improve your vehicle’s performance, not cripple it. Spearco and AFE’s bar and plate cores block so much air to your radiator that it’s like putting cardboard in front of it.

The final rating sums the three results above with a weighing of 20% for boost gain, 60% for density improvement and 20% for air flow-through to the radiator. When you add up the results of these tests it’s easy to see why Banks comes out way ahead: the Banks intercooler will produce quicker throttle response, higher continuous power at any exhaust gas temperature, better economy and a more reliable rig. All benefits and no compromises. 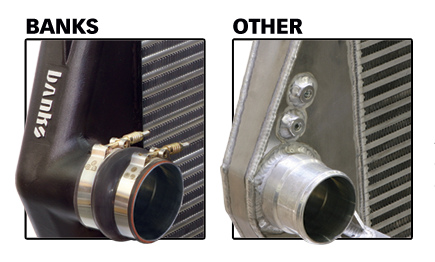 CFD designed, rugged cast-aluminum end tanks ensure durability and slick air flow. The same can't be said for the welded-up sheet tanks. Air doesn't flow well with square corners, and the welds can break at high boost when performance is needed the most. 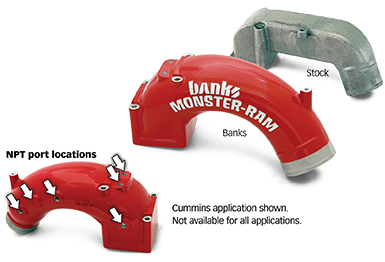 Improves airflow from the intercooler. The Banks Monster-Ram raises boost without increasing backpressure at the turbine. Result: a more responsive, fuel-efficient engine. Up to six 1/8" NPT ports for adding Nitrous, Water/Meth injection, and much more...

Check It Out — See why Banks Intercoolers are the system you need for your truck!