BigHead Wastegate Actuator Kit for use with 2001-2004 Chevy 6.6L. Power Now! When turbo exhaust backpressure increases, the stock actuator prematurely blows off the seat, softening boost in the midrange and killing torque. With twice the diaphragm area and spring pressure of the stock wastegate, Banks BigHead Wastegate Actuator keeps the valve seated longer and achieves a higher peak boost, sooner.

At peak, BigHead opens the wastegate and holds its position, for precise boost control that gives you crisp acceleration and more mid-range pulling power. 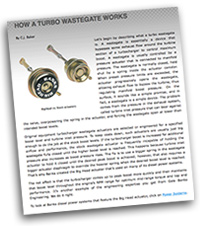