The Banks Ram-Air has an enclosed housing to keep out hot, power-robbing engine air and instead inhales cool, dense, outside air. Air flow has been improved up by 31% for greater power and MPG while helping engine run cooler and cleaner. The giant filter flows more freely than the factory's highly dense paper filter, and the aerodynamic shape eliminates restrictions. The Banks Ram-Air works seamlessly with stock sensors so not to generate trouble codes while also accommodating engine movement for greater durability.

Easy install: Reusable filter is easy to access for monitoring and cleaning. (By contrast, the stock filter is difficult to access, not reusable, and when its dirty, it requires replacement of the whole expensive unit!) The Ram-Air is triple validated before the name "Banks" is stamped on. We test; the other guys Don't. That's the Banks difference! 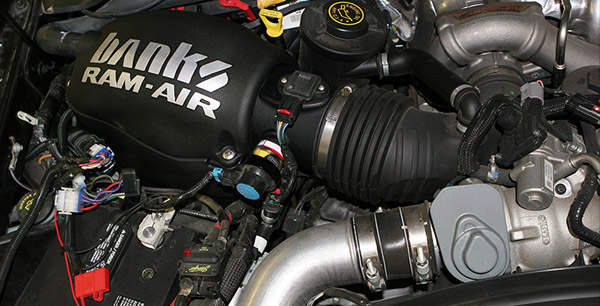 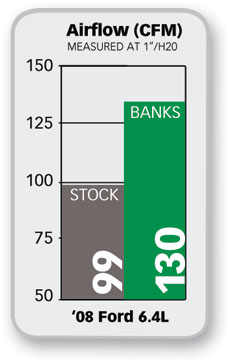 Read on to learn how Banks puts their product—and the competitors' products— to the test.
(In this instance it's a test of cold air intakes for the Cummins 5.9L.)

Vehicle Speed, Engine RPM, and Accelerator Pedal Position were logged to determine the load conditions and speeds. Temperature was measured using thermistors for increased accuracy. They were mounted to measure ambient temperature as well as temperatures at the filter and compressor inlets. Pressure transducers were used to measure pressure in the same locations. The intake system effect on air density was evaluated by comparing the temperature and pressure of the ambient air condition with the temperature and pressure of the air at the turbo compressor inlet.

All data presented assumes an ambient temperature of 77° and ambient pressure of 29.24 inches of mercury, per SAE standards.